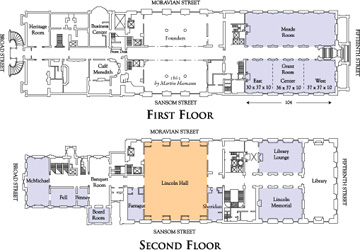 Lincoln Hall was officially dedicated on February 12, 1913 with President William Howard Taft in attendance. The chandelier originally a gasolier, was purchased by the League in 1881 to illuminate Assembly in the new Annex, and was moved to Lincoln Hall as an electric fixture in 1911. Lincoln Hall, with the portraits of all the League's presidents, can be viewed as a portrait gallery representing over 100 years of portraiture, mostly by Philadelphia artists. There is nothing that compares to it in any museum in the area. The paintings are arranged chronologically starting with C. Stuart Patterson on the northeast corner. The east and west walls look like wood but are actually concrete plaster grained to look like wood.