About The Union League Legacy Foundation

The Foundation uses the League's legacy of service to community and country to educate and inspire students, members and the general public to be more engaged and more responsible citizens.

The legacy of The Union League of Philadelphia is one of leadership, service, and patriotism. For over 150 years, its members have dedicated themselves to those ideals of political and economic liberty that are enshrined in the United States Constitution, and that were saved through Union victory in the Civil War.

The Union League of Philadelphia was founded in 1862 during some of the darkest days of the Civil War to support Union and President Abraham Lincoln. By the end of the war, the League was one of the most important private organizations of the North. It was a leading voice of abolition and civil rights during the war and the post-civil war era, and it continues to be an important civic leader in Philadelphia, the Commonwealth of Pennsylvania and the nation.

The Union League Legacy Foundation uses the first line in the League by-laws, "Every member shall support the Constitution and the free enterprise system," as the basis for its work. This work is inspired by the stunning archival, book and art collections of the Union League. Housed in a state-of-the-art collections storage facility in the Heritage Center, the collections are an important source for understanding the League's history, and its unique and important role in preserving the Union.

This is our legacy.

The Legacy Foundation was formed officially as of July 1, 2019. Please bear with us as we work to get the site and details fully up and running. In the interim, if you are looking to access the nonprofit resources (notably the collections), please access our former website, www.ulheritagecenter.org

About the The Heritage Center and Exhibits 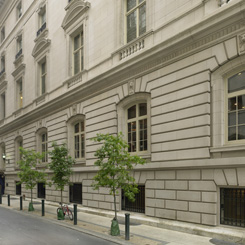